Walk this way: 7 of the UK’s most stunning walking routes

Walking is often seen as the underdog of the exercise world, but the health benefits are incredible and there are so many beautiful spots around the UK to choose from. Here are seven routes not to miss…

Brisk walking is actually more effective than running in reducing the risk of heart disease, according to the Lawrence Berkeley National Laboratory in California. Plus, the Stroke Association says that a brisk 30-minute walk every day reduces your risk of stroke by up to 27%, and a regular walking habit is said to reduce the risk of type 2 diabetes by 60%.

Walking has even been linked to the prevention of dementia – a short walk three times a week over the course of a year increases the size of brain regions linked to planning and memory, says the University of Pittsburgh.

Even better, the UK has more than 140,000 miles of public walkways, including, according to Rough Guides, “some of the most magnificent landscapes in Europe, if not the world”. It’s a fantastic chance to see nature at its best without venturing too far! So take the dog, tell your friends, bring the kids or invite your mum to explore one of these unforgettable trails, while doing your body the world of good, too.

Finish: Ballycastle. Which is a town, not a castle (sorry).

Highlights: As well as taking in secluded beaches and dramatic cliffs, this route includes the Giant’s Causeway – 40,000 basalt columns created by an ancient volcanic eruption. One word: otherworldly. 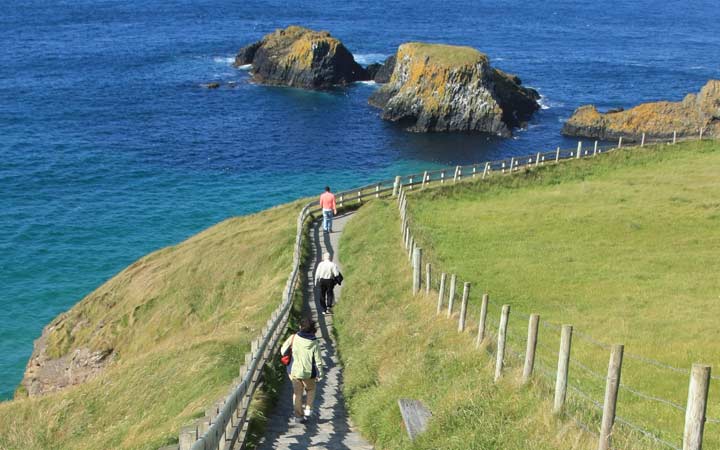 What: The Pap of Glencoe.

Where: The Scottish Highlands.

Distance: 5 miles, in a circular route.

Highlights: This mountain offers uninterrupted views of Glencoe, known as Scotland’s most romantic glen. Carved out by icy glaciers and old volcanic eruptions, the landscape is ruggedly beautiful and quintessentially Scottish.

Testimony: Molly Buckingham, outdoor-lover says: “Glencoe is absolutely stunning, and there are loads of things to do along the way, too.” 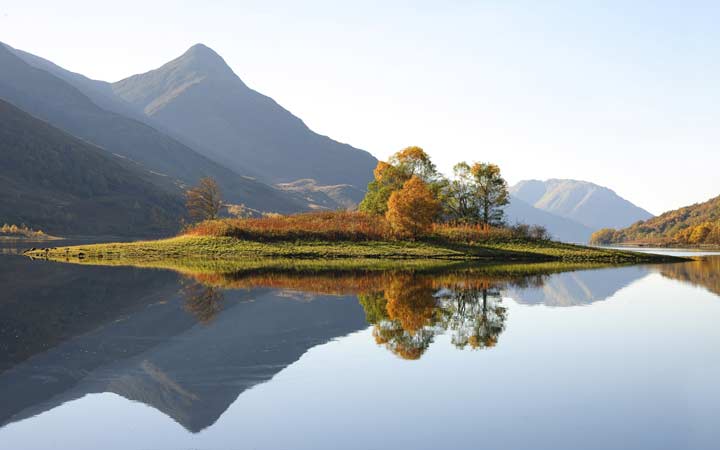 Finish: Torbreck, on the edge of Inverness

Highlights: The sparkling blue loch is idyllic, and if you don’t see the mythical beast, the scenery will more than make up for it, with the route taking in the Falls of Foyers, Urquhart Castle (pictured) and the beach of Dores.

Testimony: Sophie Banda, number-one Scotland fan says: “It feels enchanted, and the Dores Inn does the most spectacular haggis and beautiful cakes.”

Distance: 186 miles – so it might be wise to explore it in sections.

Start: The historic town of Cardigan.

Finish: Amroth Castle, where you can stay overnight if you like.

Highlights: The trail lies almost entirely within the Pembrokeshire Coast National Park – Britain’s only coastal national park – and will take you past Celtic chapels in Bosherton, the miniature city of St David’s with its imposing cathedral, as well as miles and miles of golden beaches. Readers of BBC Coast voted it their favourite trail in 2010.

Testimony: According to Tripadvisor user David L: One of the hidden gems of this walk is the route from Stackpole Walled Gardens through to Bosherston Lily Ponds and Broad Haven beach.” 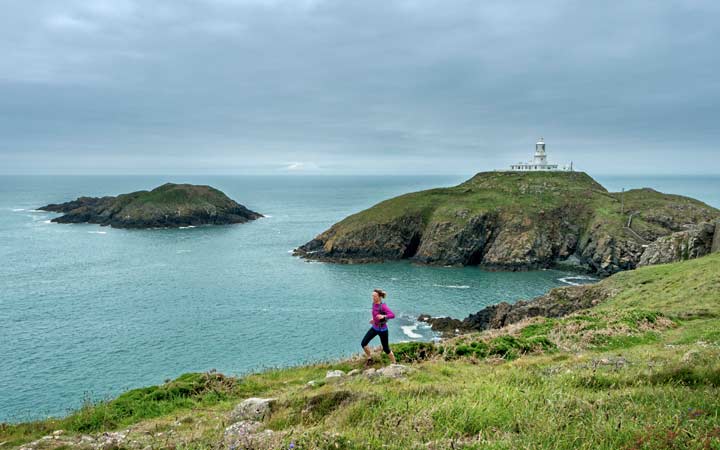 Where: The Lake District, Cumbria.

Distance: 9.5 miles, in a circular route.

Start/Finish: The village of Glenridding.

Highlights: The Lake District is one of England’s most beautiful spots, and there are few better places to take it all in than from the top of Helvellyn. At 950 metres high, it’s the third highest peak in England. This means it’s one for more advanced walkers, as the craggy Striding Edge requires a bit of ‘scrambling’.

Testimony: Andy Neidhardt, Lake District aficionado, says: “This is so challenging and rugged that it’s quite different from other routes in the area. It also really contributes to the sense of achievement when you reach the top.” 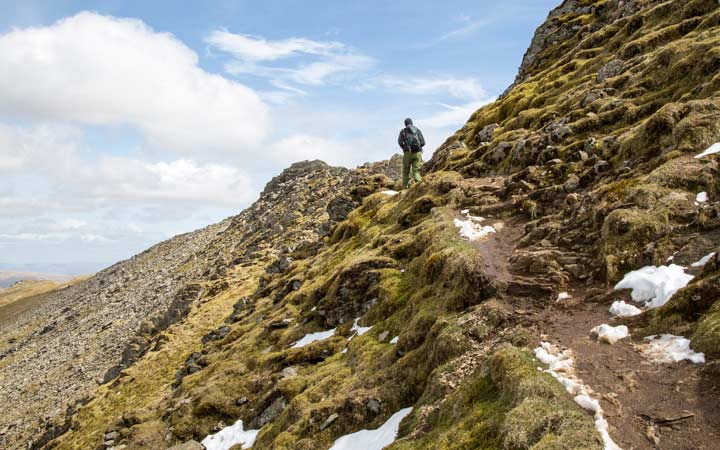 Where: County Down, Northern Ireland.

Distance: 9.9 miles in a circular route.

Highlights: This walk is centered around Mournes Mountains, a range of granite mountains that has been hailed as an area of outstanding beauty – making it one of the most Instagrammed walks in Northern Ireland!

Testimony: walkni.com user David says: “I have walked many times in the Mournes and I am not sure any of them matched this walk for views.” 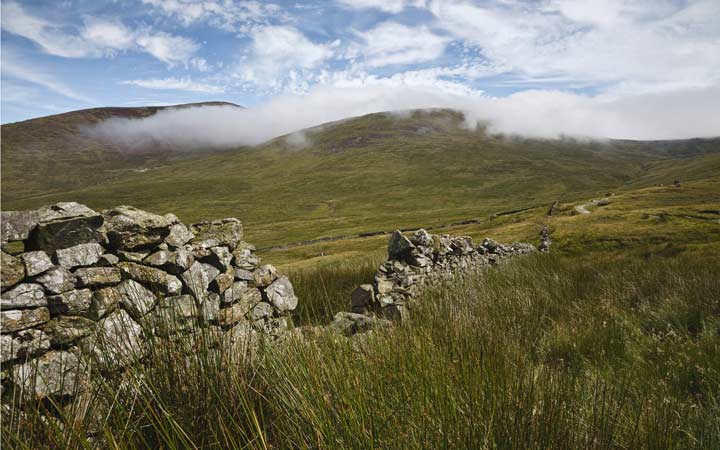 Where: The Jurassic Coast, Dorset.

Finish: Charmouth, where the beach is perfect for fossil hunting.

Highlights: The Dorset and East Coast has been named a UNESCO World Heritage Site, and this route stays along the coast for nearly the whole duration – so there’s plenty of time to take in the dramatic cliff-lined beach.

Testimony: Jenny Amery, seasoned UK walker, says: “There’s spectacular views east and west from Golden Cap, which is the highest point on the south coast. The climb up is fairly short, so it’s great for kids too.” 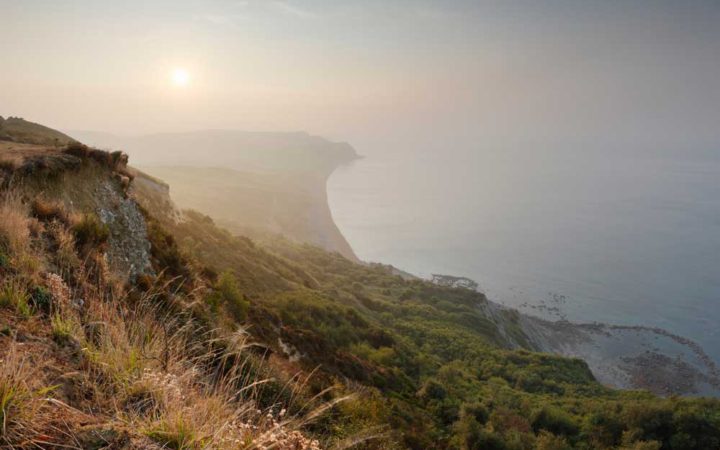 With so many amazing spots on our doorstep, it’s easy to treat your body and mind to some down (and up) time. Know of any other idyllic strolling spots in the UK? Let us know in the comment box below. 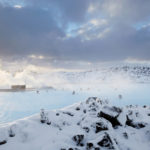 10 ultimate breaks to focus, reset and recharge Previous
5 Ways Women Can Protect Their Health Next