Vitality Ambassador Maro Itoje is one of the biggest names on the rugby planet. He was a European Champion with his club, Saracens, and reached a World Cup final with England in 2019. Here, the 26-year-old 6ft 5in London-born rugby player discusses pressure, self-reflection and the Nigerian culture that shaped him.

A Vitality Ambassador, Maro made his international debut aged 21. He’s now considered the ultimate modern professional, caring deeply for both his physical and mental wellbeing. Like many of us, lockdown has allowed him to take stock and make the most of a break from the treadmill of professional rugby. Here are some of his most revealing conclusions.

It’s good to have a period of self-reflection

‘In rugby, and pretty much all professional sports really, you’re always looking forward. It’s always about what you need to achieve, what the next thing is… Lockdown gave us a period to breathe, relax and reset without the pressures of playing a game every week or training every other day. It’s had a big effect on my mindset. I’m still relatively young but I’ve played quite a few games, so it’s given my body time to refresh and rip into some good training so I can maximise the time when I’m back on the field. It’s been good to be in the present. I learnt a bit more about myself, my mentality, my wellbeing and about the type of individual I want to be.’

Your first coaches will always be a big influence

‘I don’t come from a rugby background. I started playing when I was about 11, so my first influencers were my rugby coaches. My parents are Nigerian, so I’m not from a culture where it was the norm. My local club coach, Stuart Mitchell, used to drive me all around the country wherever we had the games. He was a massive influence in my formative years.

‘It’s interesting because initially my parents didn’t know much about the game. They were wary and saw it as a potential threat to my studies. But now they understand what it is, I can’t get them away from rugby. They travel all around the country, all around the world, whether it’s South Africa, New Zealand or Japan, to support me. They still love to watch the second team games at Saracens and I’ve not played for that side for a while! They’re just fans of the sport now.’

The price of success is hard work

‘Nigerian culture has shaped me; it’s the lens through which I see the world. I always say that I grew up in north-west London, but my house was in Lagos, because that’s just the way it went down. We were raised as Nigerian children, but living in London. It’s who I am, how I see the world, how I behave, how I think. You grow up with the same lessons: respect your elders, make sure you read your books. There was always a lot of stuff about respect, self-discipline and how you can achieve anything you want to achieve. But it comes at a price and that price is working hard. Nigerians are proud people and nobody wants to be associated with a loser who doesn’t do well – that’s always been the message.’

Being one-dimensional is a mistake

‘The potential of rugby became a thing for me at 16, when I saw people training where I trained become professional. I knew I was just two or three years behind them, so if I did X, Y, and Z, I could make this happen. My parents realised it could be a career around 18, but it wasn’t to be at the detriment of my study. They always pushed me hard.

‘I remember when I was picking universities, I floated the idea of taking a year out with rugby and coming back when I was 19 or 20. But that was a non-starter. They’ve always been supportive of rugby but didn’t want to make me one-dimensional. I’m the biggest advocate for study now, I even started a Masters in June.’

You should play everything

‘While you’re young, play everything, even the sports that are very different. They’re all inter-connected in some way. I used to use basketball for fitness. I’d play a game for school, use it as a cardiovascular workout so I was in decent shape for rugby. There’s also a load of transferable skills.’

You must focus on the craft

‘You can’t really believe the hype [of what people say about you]. The people that hype you up are also the ones that criticise you, so you can’t let yourself be determined by what other people say and think. A lot of that is out of your control, so my process has always been to focus on the craft, focus on the sport. Listen to the people you respect, and the opinions you respect. Then, I believe, everything else will take care of itself. Don’t allow all the outside noise to consume you or define who you are; it’s not a healthy way to live.’

Consistency is a good thing

‘My life hasn’t changed that much from when I was 16 or 18. I predominantly have the same friends, I live in the same part of London, my family are still where they are, and I’ve not moved to a different club. I’ve been at Saracens since I was 18, so the basics, the core fundamentals of my life have remained fairly consistent. Apart from the occasional big event, things like World Cups, my life is similar to how it was 10 years ago.’

Stepping down can help you step up

‘We’re in the Championship this year [the second division of English club rugby] and it’s a grounding experience, but there’s a lot to be gained for Saracens. We’re going to be able to play some young guys, give them some game time and exposure. Then, when we go back into the Premiership, the guys out on loan will come back a year older and wiser, and us senior guys who stayed will hopefully have had good international exposure as well, so once we all come back together we’ll be in a decent place.’ 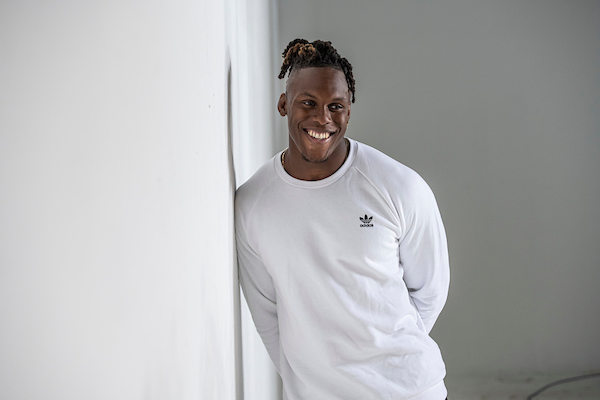 Professionalism is a privilege

‘I feel very privileged to do what I do. The first time I played for Saracens, I was still at school. After the game, as it was professional, they had to pay me. I couldn’t believe they were paying me – I was like, “Don’t you guys know I’d do this for free?”

It’s not worth engaging with negativity

‘I’ve played games where I’ve left the pitch thinking, “I could’ve done this better or I should’ve done this”, and I’ve then gone on to social media to see people saying I’ve played a really good game, that I’m the best thing since sliced bread. Conversely, the opinions of your team-mates, coaches, people you respect, yeah, they should shape you. But the opinions of randomers is not the most important thing. I don’t tend to engage with negative comments on social media – I simply don’t want to, and I don’t want to give anyone a kick out of me responding. That’s my philosophy.’

Pressure is what you make it

‘We’ve all been in situations we think are the most pressured ever. But when you look back now, you realise it wasn’t as pressured as it felt. When you’re living it, it feels like the biggest thing you’ve ever done. When I was on the Lions tour in 2017, that felt like the biggest thing that I could do, then I was at the World Cup final… and I’m sure in the future there will be similar occasions. Pressure is what you make it, and I’m able to put these occasions into perspective now. I know I’ve got a strong foundation of dealing with pressure going into any game.”

It’s important to remember where you come from

“Coming from the background I come from, the culture I come from, I always think back to when I was a young rugby player, and I want to be a role model for that person. I feel the responsibility to help them.’

For more insights into Vitality Ambassadors, check out things you only know if you’re Heather Knight here.

8 Things Nobody Tells You About Being Diagnosed With... Previous
Vitality Half-Term Social Media Competition Terms and... Next