How To Give 5 Classic Meat Dishes A Vegan Make-Over 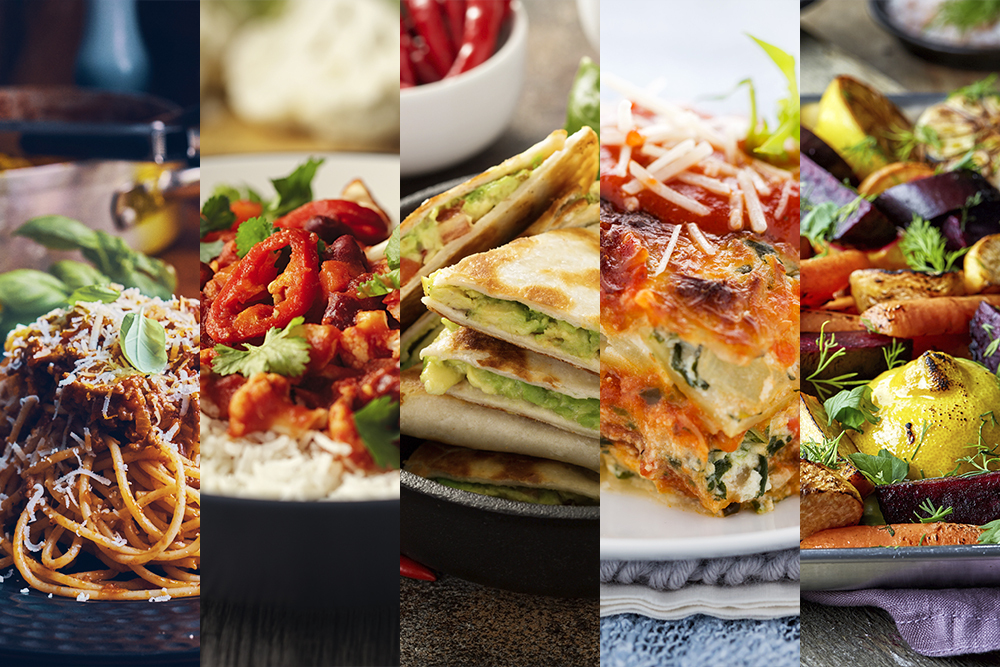 Going vegan doesn’t mean giving up the food you love – it just means swapping some ingredients. We asked Selene Nelson, author of Yes Ve-gan!, to work her magic on some of the most popular meat-based dishes.

If you’re thinking about going vegan – or you’re just keen to eat more plant-based food – you’re not alone. This year a record 500,000 people participated in Veganuary, and many are keen to keep up the momentum through the rest of the year.

But no matter how determined you might be, missing out on your favourite dishes can seem like a big sacrifice to make – and I say that from experience. In my pre-vegan days, I couldn’t imagine giving up things like lasagne, pizza, burgers or tacos. The good news is that you don’t have to: pretty much every meal can be ‘veganised’.

So if you’re trying veganism, don’t worry about creating entirely different dishes if you don’t want to – all you need to do is substitute a few ingredients.

To help get you through the rest of winter, here are five hearty, classic dishes that can easily be given a vegan makeover. 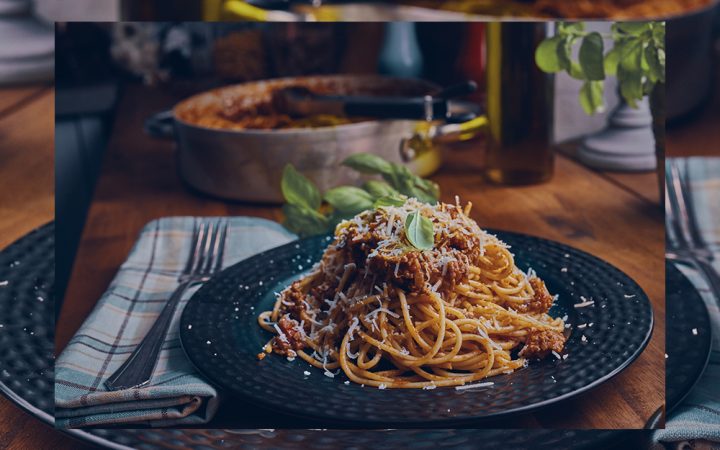 Bolognese is a classic family favourite: it’s warming, filling and easy to knock up, making it a popular weeknight supper. It’s also one of the simplest dishes to veganise. The obvious ingredient swap is the mince, and you have several choices here. You can replace the beef with a plant-based mince, like this one from Waitrose (and because many vegan minces are similar in protein as the meat equivalents, yet lower in fat, this can be a healthy, as well as tasty, swap). Or go the wholefoods route and swap the meat for protein-packed lentils. Another idea is to blitz up some mushrooms and walnuts instead.

Aside from the meat, most other ingredients in a bolognese are vegan – or can be easily veganised. Traditional bolognese recipes sometimes call for a splash of milk, and oat milk makes a great sub here. Most people like a grating of cheese on their spag bol, and if you’re one of them, you might want to try this dairy-free cheddar by Koko. The internet is packed with ideas for plant-based bolognese, but I love this recipe for vegan spag bol: it uses chopped Macsween vegetarian haggis instead of beef, which adds an unusual and delicious twist.

On a chilly Sunday, few things are as comforting as a roast dinner. A lot of people are surprised to learn that roasts are easy to veganise; once you remove the meat, most things on the plate are vegetarian, at least.

Roast potatoes, carrots, parsnips and so on are all vegan (as long as they’re not cooked in animal fat or dairy) and, if you like a side of cauliflower cheese with your roast (and who doesn’t?), this rich and creamy roasted cauliflower is a great alternative. Even Yorkshire puddings can easily become vegan – just check out this simple recipe.

Meat is traditionally the star of the Sunday roast, the most indulgent main perhaps a beef wellington. If you’re a fan, there are dozens of vegan versions online. We especially love this caramelised onion and chestnut wellington, and this mushroom and lentil wellington.

Don’t fancy the faff? Then you needn’t miss out: just pick up a mushroom and nut wellington from Waitrose. Vegan wellingtons have got to be the ultimate Sunday roast showstopper – and a great way to show off to non-vegan friends and family. 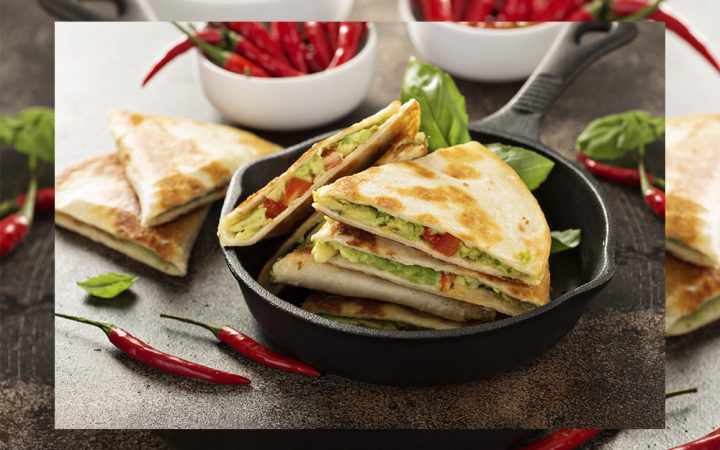 If you love Mexican food, you’ll have discovered the joy of quesadillas – tortillas that are traditionally stuffed with cheese, and sometimes meat, beans and vegetables. Cheese can be one of the hardest foods for non-vegans to imagine going without (me included!), but vegan alternatives are getting better fast. And once you know you can still indulge in all that’s creamy, melty and gooey, things become so much better and easier.

Quesadillas are a prime example of the kind of food I thought I’d have to give up when I went vegan – but just like anything else, all you have to do is make a few simple swaps.

To make vegan quesadillas, swap dairy cheese for a vegan cheese, like this smoked cheese from Applewood, which melts in a drool-worthy fashion. Or make your own Mexican-style ‘queso’ using cashews, which is a protein-packed alternative.

Because part of the appeal of quesadillas is how quick they are to prepare, you might want to start out using vegan cheese. Simply grate on to tortillas, add vegetables, grill or fry until crisp, and tuck in. A dollop of Oatly crème fraiche is the perfect sub for sour cream, as seen in this recipe for vegan roast squash quesadillas. 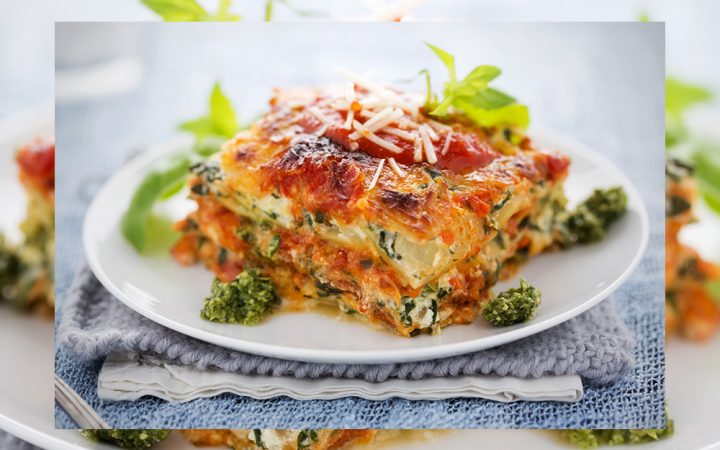 Traditional lasagne majors heavily on meat, milk and cheese, so it’s not the most vegan-friendly dish. But, once again, a few simple swaps and you have a meal that’s just as rich, comforting and indulgent – and often with the happy benefit of being healthier and greener, too.

As with bolognese, there are lots of different ways you can veganise lasagne: swap the meat for vegan mince, lentils or veg; make a vegan white sauce with plant milk and margarine; and buy vegan cheese or make your own cheese sauce from scratch.

This recipe for vegan lasagne with cashew cream and celeriac does the latter. Because it uses roasted celeriac instead of lasagne sheets, it’s considerably lower in calories than the carb-heavy classic – but you can, of course, use lasagne sheets if you’re going traditional. Packed with sweet potato, onions, tomatoes and leeks, it’s also a tasty way to get your five-a-day. 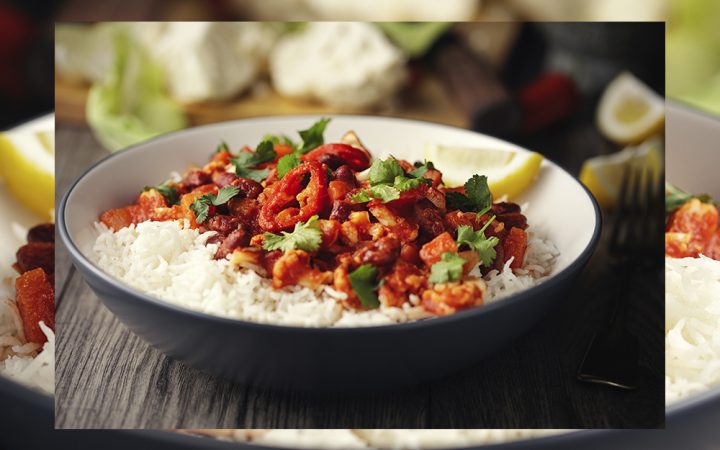 Chilli is another classic crowd-pleaser, and on a winter’s evening, a hearty, warming bowlful is hard to beat. Of course, traditional chilli contains beans as well as meat, so omit the meat and up the beans and you still have a healthy, high-protein meal. Extra beans and veg will also up the fibre and vitamin content of your supper, although you can also put together a chilli using vegan mince or mock-meat, if you like.

This easy black bean chilli takes 10 minutes to prepare, making it perfect for a weeknight. Or make the most of a range of veg with this winter vegetable chilli.

If you’re not in the mood for cooking from scratch, you can still enjoy the flavours of a chilli. You can buy this sweet potato, red pepper and soya mince chilli from Waitrose, which contains black turtle beans and pinto beans for extra protein – just serve with rice, fresh coriander, grated vegan cheese and Oatly crème fraiche.

Inspired? Check out Selene’s article, a vegan answers your questions about veganism. 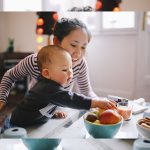 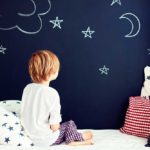