5 questions to ask the men in your life 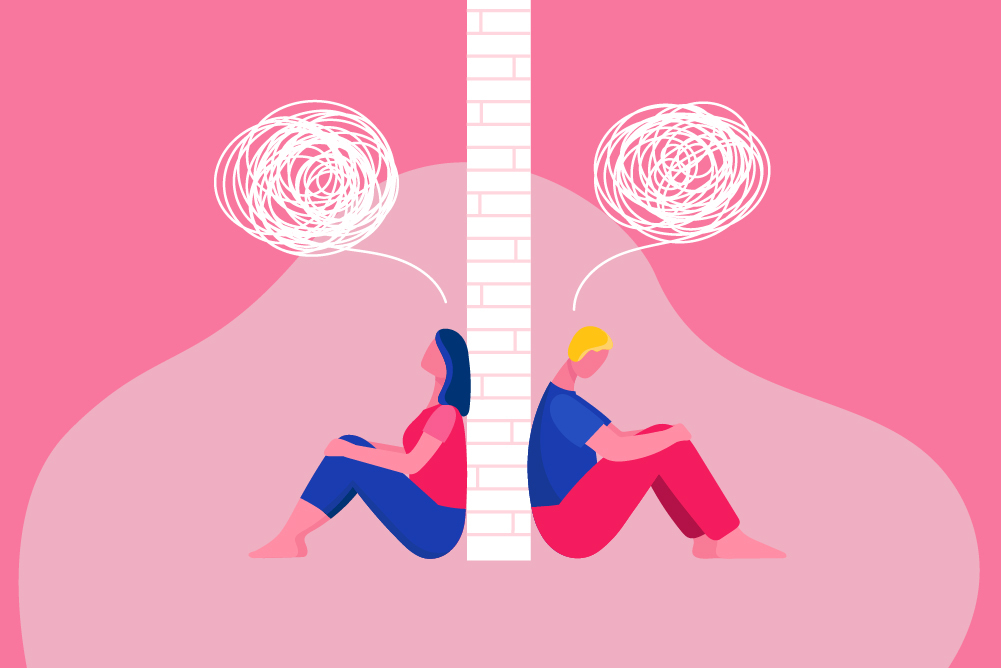 According to the Office of National Statistics, the suicide rate for men in England and Wales (16.9 per 100,000) is the highest since the start of the century. In Scotland, it’s the highest for 10 years with men making up two-thirds of suicides. Unfortunately, the pandemic effects are another layer on top of what was already a bleak picture for men.

Which begs the question, what can we do to hold up the men around us? One useful strategy is to know the most helpful things to say to someone who you suspect may be finding life tough and in need of some support at the moment.

With that in mind, we enlisted the help of Counselling Psychologist Rebecca Corney to work out the key questions we should be asking the men in our lives.

Question 1: ‘I’m having a tough week, how’s your week going?’ 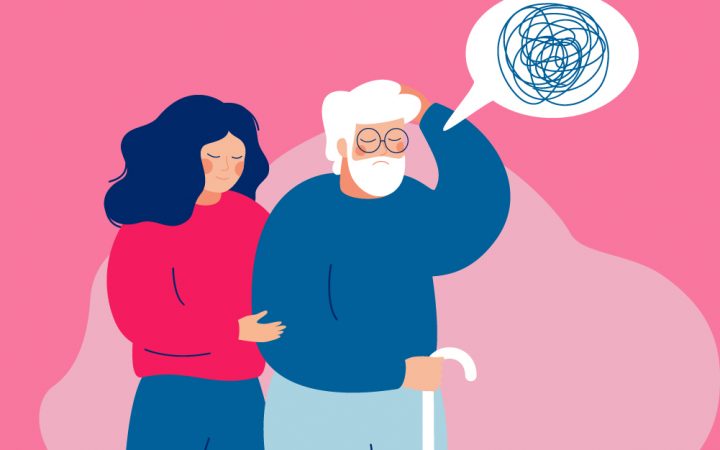 Instead of just asking someone how they are, a much better way to elicit a response is to try to connect with them by opening up about yourself, suggests Rebecca. ‘If you frame a question in terms of what they’re experiencing, it invites some sort of non-judgemental connection, so they might feel they have more permission to talk and say “I’m having a tough time, too.”’

‘In the pandemic, connecting with other people helped us maintain wellbeing,’ Rebecca adds. ‘When we don’t feel good about ourselves, one way of responding is to withdraw, and men are more inclined to shut themselves off than women. But, if we connect to people, that can help our wellbeing and manage our stress.

‘[Some] women are really good at being in touch with friends and sending messages like “I’m here for you” or “I’m thinking of you” while [some] men are less likely to reach out in that sort of way. Those sorts of statements let someone know that you’re thinking of them and that you’re not judging them, and that can be really powerful for anyone going through a tough time.’

Additionally, men are also less likely to create a network of support than women, according to Rebecca. ‘If you’re worried about a friend, who else can you recruit to be part of that network, to do similar things like checking in? The person you’re worried about will have the understanding that there are people that care about them – not just one person.’ 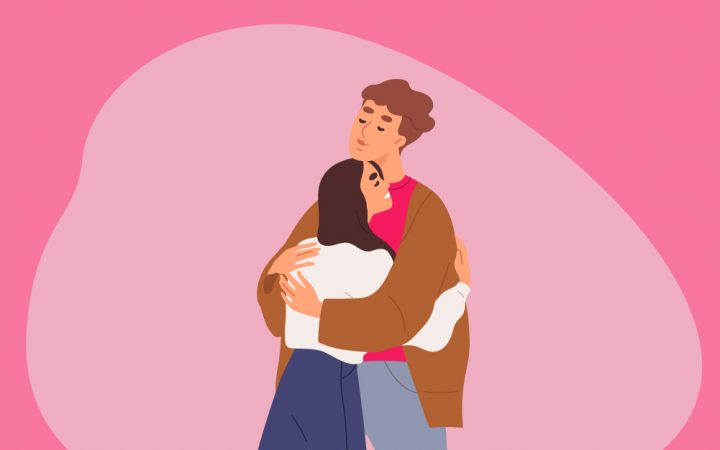 One of the biggest lessons to come from the pandemic is that we should never take physical contact for granted. ‘I think we underestimate how much we need touch as human beings,’ says Rebecca. ‘From a psychological perspective, touch releases feel-good hormones, and makes someone feel nurtured and cared for, so don’t be frightened to give your friend a hug [if they say yes].’

Male hugging is certainly not as prevalent as female, but pre-pandemic it wasn’t uncommon for men to indulge in a bit of mutual back-slapping, and that’s something that needs to become more common. But with so many of us readjusting to ‘normality’ Rebecca’s advice is to make sure you check with the recipient first. ‘Some people have issues around being touched for many reasons,’ she says. ‘So always ask first.’

Question 3: ‘Can I borrow that book?’ 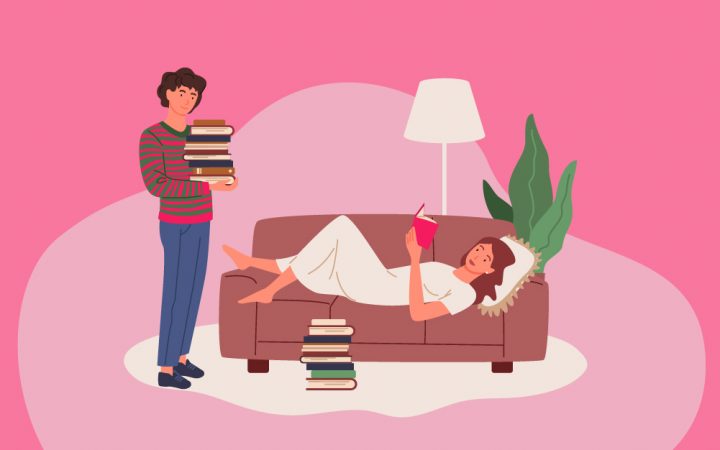 On the surface, this might not seem like a question that’s going to really help someone, but the act of giving can be extremely rewarding for us humans.

‘When we give to another it makes us feel good,’ explains Rebecca. ‘There’s something called the helper’s high – it’s about the feeling it gives us, as we feel better for ourselves.’

When we show compassion to others it invites self-kindness. Russ Harris, one of the founders of ACT (Acceptance and Commitment Therapy), recommends asking yourself ‘What can I do right now – no matter how small it may be – that improves life for myself or others I live with, or people in my community?’

With this in mind, asking someone for their help, whether it be borrowing something or asking them for their expertise, can give that person a huge lift. ‘People like to feel they’re purposeful, so if you said “You’re really good at this, can you show me how you do it?” it actually recruits them to give to you, although they’re not necessarily intending to,’ says Rebecca.

Question 4: ‘You look tired, have you been sleeping ok?’

One of the pandemic’s effects was its impact on the nation’s ability to sleep, with 70% of people reporting a change to their sleep pattern, and 30% having sleep difficulties, according to a study conducted on behalf of Royal Brompton and Harefield Hospitals. Meanwhile, research carried out by the University of Southampton found that the number of people having sleep problems rose from 16% to 25% during the pandemic.

‘Poor sleep is one of the biggest barriers to good mental health,’ explains Rebecca. ‘During the pandemic, lots of people have been living, working and sleeping in the same room. It’s difficult for our brain to work out what this room is for, so it may be stimulated when we need it to find calm, and relax in order to sleep.’

While Headspace, and other mindfulness apps are rapidly increasing in popularity, Sleepio is a relatively new app worth considering and suggesting to pals, according to Rebecca. It’s a digital sleep-improvement programme featuring cognitive behavioural therapy techniques developed by sleep scientist Colin Espie.

Sharing these kinds of ideas is really important, especially for men, as gender constructs seem to dictate what is and isn’t acceptable. ‘“That’s too much of a female thing to do” would mean I’m weak and not manly, but we need to deconstruct society’s ideas of what is manly,’ says Rebecca. 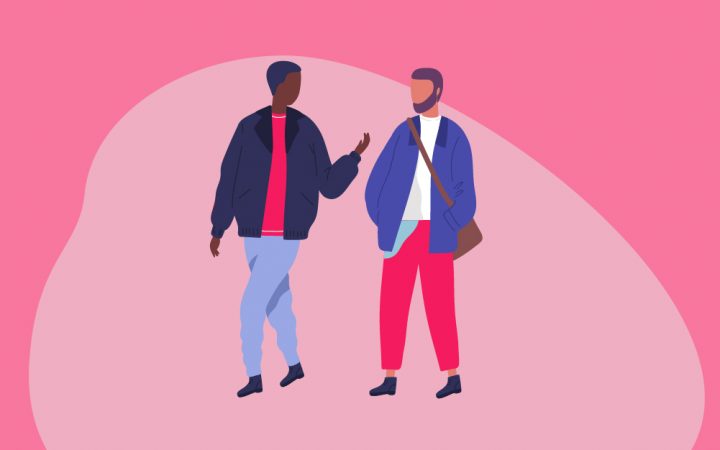 The eagle-eyed among you will have spotted that isn’t a question, but there’s a good reason for that. ‘If you send someone a message like “Fancy coming for a walk?” they’re less likely to agree than if you go to where they live, and say “Come on, we’re going for a walk,”’ says Rebecca.

Of course, other options are available, such as a bike ride or a run, but the key message here is moving. ‘Just moving can shift our emotions. Being active is vital. Our brain is an organ as well, so exercise is good for our brain. It releases the feel-good chemical endorphins and helps decrease our body’s stress responses.’

And it doesn’t have to be a specific exercise, with Rebecca also suggesting that anything from cleaning, tidying and gardening have similar effects.

If you or someone you know is in need of extra support, take a look at these useful sites:

Looking for more advice on how to support the men in your life or to support yourself? Here’s how to start tackling the stigma: the mental health advice all men need to know here. 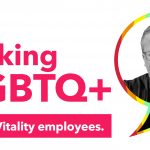 Talking LGBTQ+ with Vitality Employee Dwaine Previous
What Is Vitality Car Insurance? Next 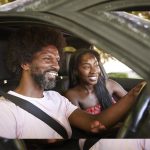 5 easy barbecue sides to add to your recipe repertoire

7 small ways to help your community (and boost your health)