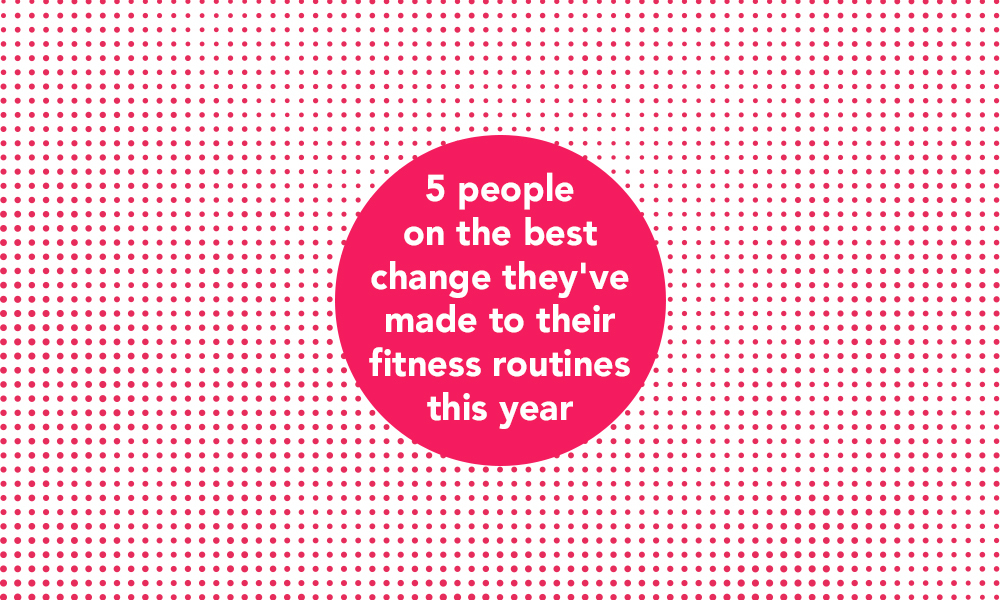 Over the past 18 months, we’ve all had to reinvent our exercise regimes. When gyms were forced to shut in March 2020 and weekly parkruns were put on pause, everyone had to come up with new ways to motivate themselves to train. Whether that was going from doing nothing at all pre-pandemic to clocking up 10,000 steps a day, or adapting your gym routine to fit into a tiny living room with a toddler or dog as a PT, people across the world were discovering new and inventive ways to train.

A survey by Nuffield Health found that 76% of the UK public had taken up a new form of exercise during the first months of lockdown, with walking being the most popular exercise. Meanwhile, according to a Sport England study, almost two-thirds of UK adults consider being active to be more important during the pandemic than before.

One of the many challenges has been finding ways to motivate yourself when traditional ways of training have not been available. We spoke to five people to find out how changes to their workout routines have affected both their mental and physical fitness. 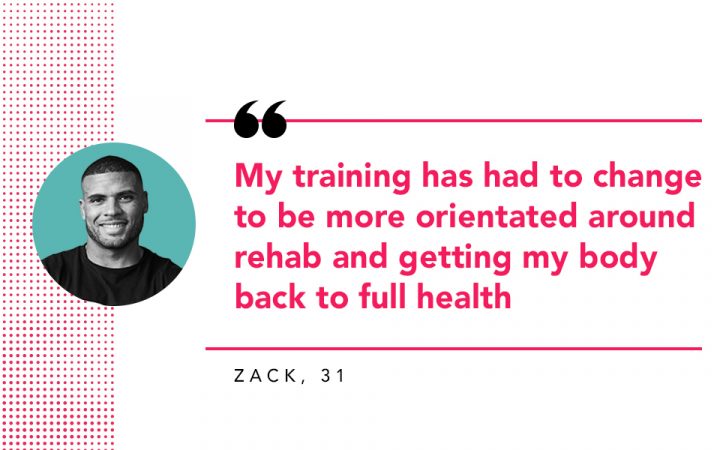 ‘Earlier this year, in the middle of the competitive season for the CrossFit Games, I suffered a devastating injury that forced me to resign from the season. I was struggling with pain in my hip flexor which made it impossible for me to even squat. I knew I had to make the hard decision to step out of the competition. So my training has had to change to be more orientated around rehab and getting my body back to full health, rather than focusing on the season and the intense style of training I usually do.

This has forced me to look at other areas outside my traditional training, which I may not have had time for otherwise. I started working with a movement coach to help pinpoint the little weaknesses and muscular imbalances in my body and find where my mechanics were breaking down, which in turn could cause injuries and niggles.

‘Learning more about my body has been an interesting process and an exciting challenge while I’m unable to do my regular training. This has helped me to correct gaps in my performance and become more efficient, so I can reduce the risk of future injuries and focus on coming back fitter and stronger. While it was challenging having to withdraw from a competition that I’d spent more than a year preparing for, I’m comfortable knowing that I made the best decision for me. It’s a case of looking at the positives and making changes to mitigate what went wrong for next time. Accepting my circumstances and channelling my energy into a different goal – to get back to health – was huge in helping me stay on track. Setting a goal and having something to aim for with your training is the biggest motivator and the best thing to keep you accountable.’ 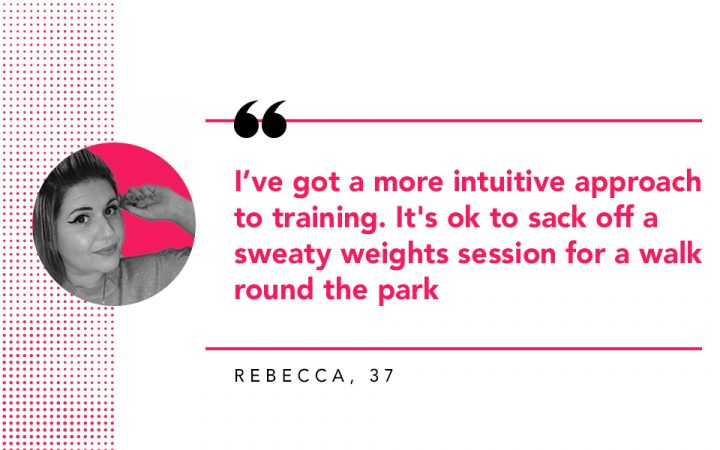 ‘At the beginning of lockdown, I felt like I really had to throw myself into training. It was that or end up losing the strength and fitness I had built up over the last few years. I have weights, bands and a fancy adjustable kettlebell at home, so while people were struggling to get hold of gym kit, I felt quite lucky to be able to just crack on. I’m an avid gym-goer, so I tend to go five or six days a week. Without it I felt lost, so I decided to write my own plans – it was important to me to do as much off-screen as I could. Instead of being strict with doing HIIT every session or making sure I trained every session for an hour, I tapped into a more intuitive way of training. My sessions were planned around how I felt in my body: for example, if I was tired, achy, had my period, didn’t sleep or lacked energy. This has been a real positive for me. It’s taught me that it’s OK to sack off a sweaty weights session for a walk round the park or to ditch a hardcore cardio class for a gentle yoga flow. We have all been through the wringer over the past year. There was no “right” way to do lockdown, but what I did learn was that doing a little of what you feel like is better than berating yourself for not doing an hour’s workout. That’s the mentality that’s got me over the last 16 months or so. In a weird turn of events, this way of training seemed to stand me in good stead when the gyms reopened in May. I’ve really upped my sessions, I’m mixing up weights with classes, yin yoga with walking, and I feel much more in control of my exercise routine. I do find it quite addictive, so after a chat with a PT pal of mine, I’ve decided that Wednesdays and Saturdays will be rest days. It’s easy to go overboard, but it’s important to give my body a rest. Exercise should be something that complements your lifestyle, not a chore that you resent. Once you find out the best way to incorporate it, then you’ll not look back.’ 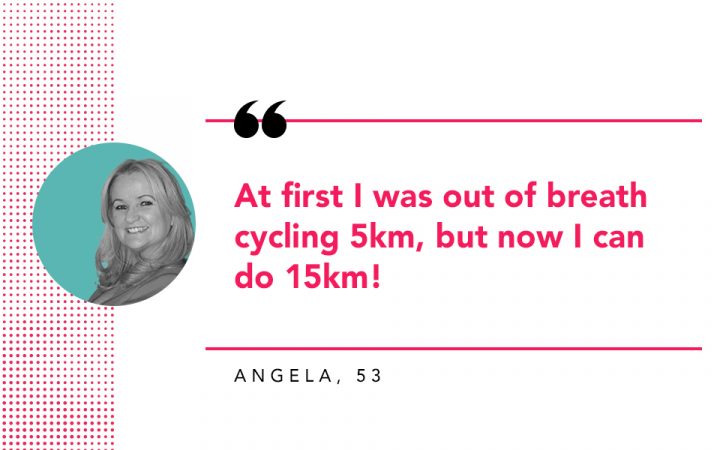 ‘At the start of this year I weighed 12st 2lb (I’m only 5ft 2in tall). I decided I had to lose weight because Covid was particularly affecting people who were overweight. Before 2021, I was probably only doing 2,000 steps a day, so I started going for walks on the beach with the aim of doing 10,000 steps – I was averaging around 8,000 most days. I asked for an Apple Watch for my birthday in February so I could track my steps, and I try to close the device’s three Move, Exercise and Stand rings every day [which monitor daily how many active calories you burn, whether you hit a target of 30 minutes brisk exercise, and whether you stand for at least one minute during 12 different hours]. I also changed my diet and joined WW [formerly Weight Watchers]. The healthier I got, the more my mindset changed, because when you look good you feel good about yourself. So I set myself a target to get to 9st 7lb by August, as it’s my 30th wedding anniversary. It takes a lot of focus to do the exercise, because when I come in from a long day of work, I just want to sit down and watch TV. I aimed to lose the weight gradually, and have continued to lose 1-2lb a week – I’ve currently lost a total of 26lb. I also do 15 minutes of Pilates every day, and often cycle along the prom – at first I was out of breath cycling 5km, but now I can do 15km. When you’re overweight, your confidence can be knocked, and you feel lethargic. I speak at a lot of events and you feel like people are judging you. Losing this weight has utterly changed my mindset – I’ve started to believe I can do anything. Working towards a goal was crucial – keep that at the front of your mind.’ 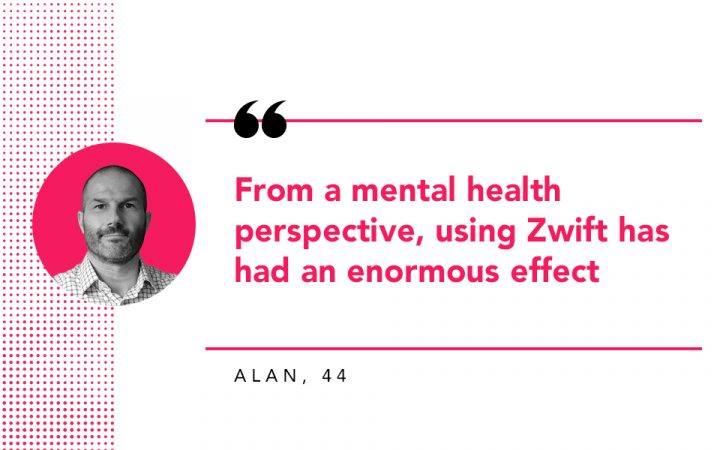 ‘I do a lot of handcycling [cycling powered by your arms rather than your legs], and pre-lockdown, I rode mainly on the roads. The biggest concern is that the roads have to be wide and safe. I can’t go on hilly or narrow roads as I’m likely to not be seen as the bike is low to the ground. So, in lockdown, I did lots of riding on my turbo [a static device that you attach your bike to, replicating the feel of the road] using the virtual platform Zwift. The number of riders on there was just crazy. Everyone was desperate to find a way to engage, so there were a lot of virtual meet-ups within the game.

‘March is the time I usually start ramping up my training, so in the first few months of lockdown I was doing 90 minutes-plus of training at least four times a week – a lot more than I would have done on the roads. Then on weekends, I’d try to bag one of the longer routes, which would take three or four hours and, on a handbike, that’s a real challenge.

‘Zwift has had an enormous impact in terms of helping to motivate me. It’s also helped in keeping me on track, as you can set a target and it’s always there, giving you little goals to aim for, like completing a stage or beating a PB. Also, there are other virtual riders going past, and sometimes you think, “I’m just going to see if I can keep up with this person for a few more kilometres.” You don’t get that kind of motivation on the road.

It also gives you the sensation of being out on the bike, to the extent that after some rides I’d find myself complaining to my wife about the weather on a virtual platform. It’s so immersive that you feel as if you’ve actually been away from the house, so from a mental health perspective it had a huge effect.’ 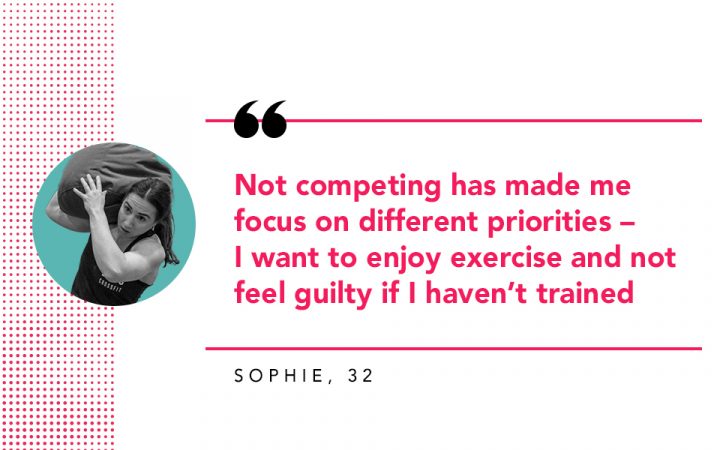 ‘I’ve always been a big advocate of exercise and its positive impact on mental health. I’ve been doing CrossFit since 2012 and, before the pandemic, I trained four times a week for around 90 minutes. I’m fortunate to have a garage with enough kit to continue training. However, not being able to train with others or compete has had a big impact. The extent to which I pushed myself declined and my overall strength decreased as, mentally, I found it challenging training for so long on my own. Keeping the motivation to train at times was hard, especially when I was busy with work, doing a master’s degree and looking after a three-year-old. This meant I had to tweak sessions, which left me feeling like I’d failed before I’d even started. It took me some time to drop the ego and accept that doing something is much better than nothing, even if it’s just a 20-minute session in the living room.

‘As a result, I found myself wanting to do exercise away from the garage. I even wanted to go running, which was a surprise – once I started CrossFit I gave up long-distance running (anything over one mile being “long” distance!).

‘Once we could start meeting with one other person for exercise outdoors, it opened up a social aspect that had been lacking for many of us. Running with one of my friends brought that back and pushed me to run faster and further. I also recently started open-water swimming, which has been really invigorating. Not competing has made me focus on different priorities – I want to be healthy and exercise, but I also want to enjoy exercise and not feel guilty that I haven’t trained.’

For your gluten-free guests, a Saffron Orzo with Griddled... Previous
Grilled Miso Salmon with Ribbon Salad Recipe Next 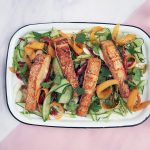